We do not do the good we want; structural sin and societal change

In my previous post I reflected on how the coronavirus and climate crises might prompt us to re-assess some of our deepest values. What do we really miss now that we are deprived of it? Equally, what aspects of our lives turn out to be less important than we thought?

It still feels like we’re at a very early stage when it comes to evaluating what ‘lessons’ we might be learning from the current pandemic; many things are still so incredibly uncertain. But there is one question that has stuck with me over the last few weeks: even if this time of crisis allows us a brief revelation of what we hold most dear, why do we so often fail to put our values into practice?

For a behavioural scientist, the answer is something to do with the phenomenon of cognitive dissonance—our peculiar ability to hold two or more contradictory beliefs or ideas side by side. Simply put, the human mind is not as rational as we sometimes like to think. In the case of climate change, the notion of cognitive dissonance goes some way towards explaining why it can be so easy to lecture others about their emissions, and yet so hard to change our own lives. We are all climate hypocrites, of sorts. But what is especially interesting is that we often tend to resolve this inconsistency between our values and our practice in favour of the way we behave. Invariably, we act first and reflect on our values later, inventing reasons to justify our behaviour.

Christian theology also has quite a substantial and longstanding answer to this question about putting our values into practice—a similar idea to cognitive dissonance but expressed in a very different idiom. As Saint Paul writes, slightly cryptically, to the Romans: ‘I do not do the good I want, but the evil I do not want is what I do.’ Despite the best of intentions, we regularly find ourselves doing and saying things that do not match up to our ideals. It can be an awkward, even embarrassing, word in our largely secular culture, but this failure to live up to our values is part of what theologians mean by the concept of sin. On this understanding, sin is much less about specific instances of moral impropriety and the voyeuristic gaze that accompanies such exciting misdemeanours, and more about a deep-seated and ongoing weakness that pervades the human condition. Saint Paul, as a Christian convert, finds this no easier than anyone else; he still struggles to practice the virtues he preaches.

And yet, this focus on cognitive processing and personal sin, it seems to me, is only half the story. The problem with these lines of thinking is that they are deeply individualistic. Alongside our internal moral struggles are a whole raft of structural and systemic reasons as to why we cannot, and do not, act in the way that we would ideally like. One only has to look at some of the discussion surrounding the coronavirus death toll in the BAME community in the UK to realise that no lone individual living up to their values is going to be able to solve such a problem. This is about a deeply embedded and institutionalised racism. Similarly, when it comes to the climate, our climate hypocrisy stems as much from our societal structures as it does from our personal failings. Some people simply cannot afford to travel by train when—at least until recently—it is so often cheaper to fly. It is a position of extreme privilege to be able to act as an isolated moral agent, unconstrained by social or financial practicalities. Indeed, this is why the UK government’s current rhetoric about ‘common sense’ in the face of COVID-19 is so woefully inadequate; many people simply do not have the freedom to act as they would desire. Furthermore, certain sectors of society, who have an interest in maintaining the status quo—such as groups within industry, finance, media, or politics—use their influence to dictate what is practical and affordable for others.

But there is a theological stand of thinking that recognises these systemic inequalities. It was in 1968, at a conference in Medellín in Colombia, that a group of Catholic bishops declared that the church should be taking a ‘preferential option for the poor’ citing ‘the tremendous social injustices existent in Latin America, which keep the majority of our peoples in dismal poverty’. What they recognised was that a message of purely spiritual liberation ultimately rings hollow for those who suffer from socioeconomic depravity that is entirely beyond their control. In 1971, Gustavo Gutiérrez, one of the leading figures in this new movement, published A Theology of Liberation, which gave ‘liberation theology’ its name.

According to liberation theology, then, the problem we run up against with both coronavirus and the climate is one of ‘structural sin’. On this view, sin is manifest historically and societally, from the way that healthcare and housing systems imply that certain lives matter less to the perverse incentives that continue to make it profitable to dig up fossil fuels. Such structural sin is especially pernicious because no one person can be held accountable, as scapegoat or otherwise. Yet we all contribute to this systemic sinfulness inasmuch as we partake without protest in institutions and societies that perpetuate these injustices. Some sort of profound transformation seems necessary if we—as nations and communities—are to do any better at living up to what we profess to value.

At the present time, many in the environmental movement are hoping that the current global lockdown might provide the perfect opportunity to re-imagine the whole fabric and layout of society. In Amsterdam, for example, the plan is to re-start the city according to Kate Raworth’s model of ‘doughnut economics’ in which planetary boundaries are respected and everyone lives within their means. Such ideals are eminently laudable, but societal revolutions are also hard-won: they require many years of campaigning across a broad range of interest groups.

In a sense, therefore, Saint Paul was right: putting our values into practice is a persistent challenge. Conversions are all very well, but it is still a daily struggle to do the right thing. Yet Saint Paul might have been even closer to the mark if he had framed it as a problem for the whole community: we do not do the good we want. In other words, redemption from structural sin is necessarily a collaborative effort. Acknowledging our own failings and recognising how difficult it is to live up to our own ideals is a good place to start. But we also need to work together in this endeavour, showing solidarity with others and joining together to hold our institutions to account. It is we should be trying to put our values into practice.

Tim Middleton is a doctoral student in the Faculty of Theology and Religion, where his research focusses on intersections between ecotheology, trauma studies, and strands of contemporary philosophy. He is part of the Laudato Si’ Research Institute in Oxford, an Associate of the Faraday Institute of Science and Religion and a member of the European Forum for the Study of Religion and the Environment. Tim first trained as an Earth Scientist and previously completed a DPhil on earthquake hazard in northern China. 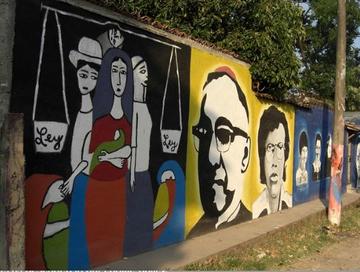