The heroine of Gustave Flaubert’s 1857 novel Madame Bovary, Emma, is the daughter of a farmer, who has been educated ‘above her station’ alongside aristocratic girls in a convent. She read Romantic novels, some of them smuggled into the convent illicitly, and her reading has filled her with vivid, unrealisable fantasies and less clearly defined aspirations to a more glamourous life. When Charles Bovary, a medical officer from a nearby village, comes to the farm to set her father’s broken leg, he falls in love with her. He is probably one of the first men Emma has met who is not a farmer, a priest, or her father. Naturally she accepts him. Theirs is a country wedding, rather more rustic than Emma would have liked (she would have preferred to be married at midnight, by the light of flaming torches). Emma’s wedding cake gives physical form to her Romantic dreams and half-formed aspirations.

Clearly, Emma is not going to find satisfaction in her married life. Madame Bovary is one of the greatest French adultery novels, adultery being – of course! – one of the great themes of the French novel. Plot spoiler: it doesn’t end well. At the moment of her wedding, however, Emma still has, intact, the notion that she will find ‘la passion’ and ‘la félicité’ in married life. For the first chapters we are not given much access to her point of view. Instead, we see her mostly from outside through Charles’s gaze: her slim fingers, her sensuous gestures, and a sort of iridescence of her whole being, from the colour of her eyes to the light playing through her parasol. The wedding cake offers us a glimpse of things that we will learn later about Emma’s inner, fantasy life; and because it is a visually ridiculous object it also tells us about the impossibility of those fantasies.

The cake is a joke – a grosse blague, such as Flaubert was very fond of. And yet it is not simply a way of mocking Emma’s Romantic dreams and social aspirations. Flaubert believed that irony at the expense of his characters did not reduce pathos (or the reader’s emotional response); on the contrary, it should increase it. Emma is a tragic figure in a very modern sense: she is caught in the gap between her inner life and the real world in which she lives. We are all potentially subject to this irony. Flaubert is reputed to have said ‘Madame Bovary, c’est moi’ and many of us could say as much. Later in the century, a philosopher called Jules de Gaultier was to coin the term le bovarysme (Bovarysm) for what he saw as the essential human capacity to imagine that we are something we are not.

Here is the description of Emma’s wedding cake, in French and in English.

Listen to the passage read in French by Elise, an undergraduate at Oxford University.

The tarts and nougats had been ordered from a pastry-cook in Yvetot. As he was new to the area, he had gone to a great deal of trouble, and he himself brought to the table, at the dessert stage, an elaborate confection which drew cries of admiration. The base was a square of blue cardboard representing a temple with, round its sides, porticos, colonnades and stucco statuettes in niches spangled with gold-paper stars. The main tier consisted of a medieval castle made of sponge cake, surrounded by tiny battlements of angelica, almonds, raisins and orange segments; and, finally, on the topmost layer – a green meadow with rocks, lakes of jam, and hazelnut-shell boats – a little Cupid sat on a chocolate swing, the uprights of which were finished with real rosebuds in the place of knobs.

Listen to the passage read in English translation by Eleanor, an undergraduate at Oxford University.

The manuscripts and drafts of Madame Bovary can be consulted on the website of the Centre Flaubert (Université de Rouen): http://www.bovary.fr/  The draft of the cake passage is at: https://www.bovary.fr/folio_visu.php?folio=1408&mode=sequence&mot= 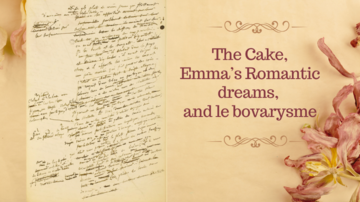