Flaubert’s description of the Bovarys’ wedding cake might – and does – seem over the top. It is however worth pointing out that this was an era of extraordinary multi-tiered cakes, or pièces montées. In the 1830s cakes for special occasions, in the high society to which Emma aspired, were influenced by the creations of the great artiste-patissier, Marie-Antoine (Antonin) Carême (1784-1833). Carême wrote and (lavishly) illustrated his own book on the architectural models for his exquisite edible creations in 1828. Here is an image from the fourth edition in 1842, to give you an idea of quite how ambitious one could be with cake: 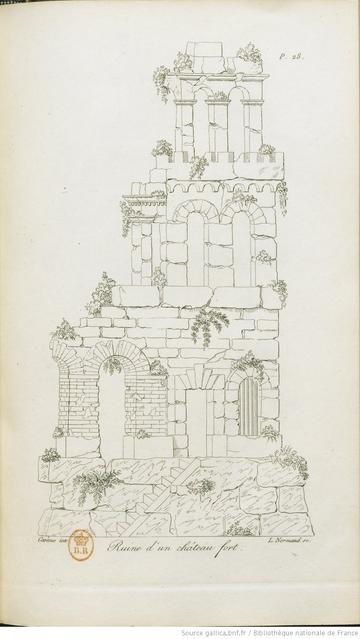 ‘Ruins of a castle’ (‘Ruine d’un château fort’), from Antonin Carême, Le Pâtissier Pittoresque (1842 [1828]), with thanks to the Bibliothèque nationale de France.

Flaubert would have known something of these remarkable creations, if only at second hand, and as mentioned in earlier blogs he was interested in exploring the aesthetics if kitsch. But what would he have made of the project of drawing, painting, or even creating in 3-D, the cake from his own novel?

Notoriously, in a century of illustrated novels, Flaubert took a firm stance against illustration. When the question arose in relation to Salammbô, his novel set in ancient Carthage, he was intransigent. ‘As for illustrations, even if I were offered a hundred thousand francs I swear there wouldn’t be a single one. […] I find that stupid, especially where Carthage is concerned. […] Ah, show me the dork who will paint a portrait of Hannibal. – And the drawing of a Carthaginian armchair! […] What was the point of using such art to leave everything vague when some dolt will demolish my dream with inept precision. […] In a huff, f** it!’ (‘Quant aux illustrations, m’offrirait-on cent mille francs, je te jure qu’il n’en paraîtra pas une. […] Je trouve cela stupide, surtout à propos de Carthage. […] Ah! qu’on me le montre, le coco qui me fera le portrait d’Hannibal. — Et le dessin d’un fauteuil carthaginois ! […] Ce n’était guère la peine d’employer tant d’art à laisser tout dans le vague, pour qu’un pignouf vienne démolir mon rêve par sa précision inepte. […] Hindigné, faoutre !’ (Letter of 5 July 1862, his emphasis).

Nevertheless… creating a visual version of the Bovarys’ wedding cake is not a classic act of illustration, but more like visual riffing: improvisations on a passage. We’re not trying to show the obvious scenes and characters: Emma being courted by Charles, or riding with Rodolphe, or on her deathbed. Since Flaubert’s description of the cake is absurd, even by some accounts ‘impossible’, a visual rendering of it is a way of exploring a logical absurdity. (It may also be partly inspired by a spirit of contradiction, since I now have a strong urge to try to draw a Carthaginian armchair.)

My own drawing of the Bovarys’ wedding cake was intended to help the Oxford Cake Shop in planning their real-life version of the cake (see https://www.torch.ox.ac.uk/article/the-cake-the-idee-recue-and-the-invention-of-kitsch). I’m absolutely delighted to say that my call for alternative takes on the cake has had three responses that are, in their extremely different ways, much more creative and less literal-minded than mine.

Our first cake for the day is by John French, an Australian artist, graphic designer and illustrator living in Barcelona, who does a lot of work with photography and collage, as well as being involved in skateboard deck art (see Mosswaterproject.com and instagram.com/mossfoundationskaters). You can see more of his work at  www.instagram.com/johnefrench and also at https://www.flickr.com/photos/johnefrench/. (He also takes commissions johninbarcelona@gmail.com). John’s picture shows the cake less as an object in itself than as a moment early in Emma’s story when she has vague, rosy dreams for her own future. Perhaps at this point there are still multiple paths open to her, or at least she still feels that is the case. When I am talking about Madame Bovary with students there is a very wide spectrum of responses to Emma, ranging roughly from an irate ‘She’s a complete idiot’ (I quote verbatim) to ‘She is all of us, and we need to dream’ (my paraphrase). I gather from John’s comments that he would come down very firmly in defence of dreams and even take an indignant stance against Flaubert’s mockery. (Ah, but Flaubert is mocking himself, John!) John’s picture has some neatly nineteenth-century elements (particularly the marbled paper effect) seen through a very twenty-first-century lens. 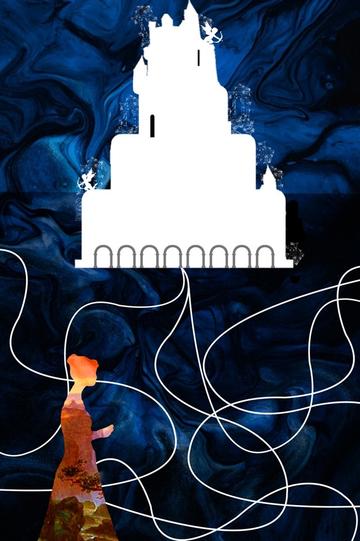 Our second riff on Mme Bovary’s Wedding Cake is by Mini Grey, an Oxford-based artist and children’s book illustrator. You can see her ‘Sketching Weakly’ blog at http://www.minigrey-blog.com/ or follow her on Twitter @Bonzetta1. She recently illustrated The Book of Not Entirely Useful Advice, by A.F. Harrold. Mini likes drawing animals and there aren’t (in theory) many in this cake, unless you count the cherub, but she suggests that the mice may have escaped from Miss Haversham’s cake. In any case, I think the soulful expression of the mouse in the sponge-cake castle is entirely appropriate. Mini has also managed to incorporate some of the extraordinary details of Flaubert’s description, including the bright green, candied angelica decorations and the hazelnut boats – and she absolutely aced the jam lake. 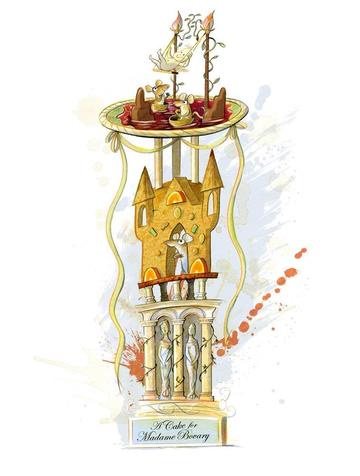 Take on the Cake 2: Mini Grey

Our final take on the cake (for now), following time-honoured alphabetical order, is by Jessica Rushton. Jess is a PhD student in French literature at Durham University, working on rebellious maidservants in nineteenth-century French fiction. She also does watercolour portraits of her favourite authors, some of which you can see on Instagram @happyfewportraits. Jess’s drawing, like mine, reveals the true absurdity of putting a meadow and lake on top of a castle rather than the other way round. How will The Cake Shop manage it? For her classical temple, meanwhile, she seems to be channelling the spirit of the great pâtissier Carême, but with the addition of Flaubert’s gold paper stars. 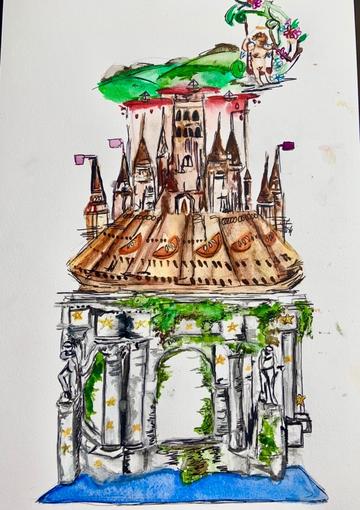 Take on the Cake 3: Jess Rushton

Flaubert, Gustave, Correspondance, 5 vol.s, ed. by Jean Bruneau and Yvan Leclerc (Paris: Gallimard ‘Pléiade’, 1973–2007). See also https://flaubert.univ-rouen.fr/correspondance/edition/. The best translation is probably Gustave Flaubert, Selected Letters, translated by Geoffrey Wall (Penguin, 1997). Earlier translations tended to be censored, and there is quite a lot that could potentially be censored in Flaubert’s correspondence (US friends, please note: this is an example of British understatement). 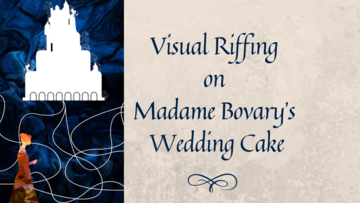