The Wedding Cake, Charles Bovary’s Hat, and the Impossible Object

It might seem odd to compare an elaborate tiered wedding cake (or pièce montée) to a hat. Nevertheless, Flaubert’s satirical description of the cake has a lot in common with his description of the hat Charles Bovary wore as a schoolboy, right at the beginning of the novel. This hat is now rather notorious – much more so than the cake.

As with the wedding cake, Flaubert’s description of Charles’s hat combines contrasting, incompatible layers. Here the target of Flaubert’s humour is not Romantic aspirations or visual clichés. Instead, he is making fun of contemporary theories of Realism which saw language as having a transparent relationship to the real world. In good ‘Realist’ style he gives us a detailed description of the physical qualities of the hat. Each part is plausible and even mundane, but put together they add up to a ridiculous, extravagant, and perhaps impossible object. It is part fur, part velvet; part flat-topped cap, part cotton nightcap; it has a visor and a tassel. Like the cake, it is made up of bands or layers that don’t work together. Nabokov, who called this Flaubert’s ‘layercake’, ‘counterpoint’ or ‘contrapuntal’ technique, drew Charles’s hat in the margins of the notes he used for his lectures on Madame Bovary.

Bringing multiple, clashing elements together in a surreal vertical arrangement – temple, castle, lake and cherub on the one hand; fur cap, padded hat and bonnet on the other – Flaubert deploys one of his favourite literary techniques: juxtaposition. This allows him to undermine the notion that language straightforwardly portrays real-world objects, without any need for explicit commentary by the narrator, simply by juxtaposing incompatible things so that they undermine each other.

While they may both be ‘unrepresentable’, unlike the wedding cake Charles’s hat has inspired many attempts at representation. The challenge arises precisely because, while the hat is described in fine, ‘realist’ detail and each detail is plausible, put together the details add up to a whole that is a monument to implausibility, if not actually materially impossible.

For some perverse spirits that is of course sufficient reason to try. As mentioned, Nabokov doodled the hat. A whole book of versions by various illustrators and graphic novelists was published under the title La Casquette de Charles Bovary (sadly, two of the contributors were killed in the 2015 Charlie Hebdo shootings). I have also had a stab at drawing the hat, in an extremely literal-minded style that I hope helps to reveal its preposterous nature.

Here is my own drawing of Charles Bovary’s infamous hat, another object made up of incompatible layers.

Illustrating Flaubert in any form – drawing, film, cake – is arguably problematic because he himself famously rejected the idea. ‘Never, as long as I live, will my works be illustrated, because the most beautiful literary description is devoured by the most mediocre drawing.’  (‘Jamais, moi vivant, on ne m’illustrera, parce que la plus belle description littéraire est dévorée par le plus piètre dessin.’ (Letter of 12 June 1862)). This sense of the vulnerability of words faced with the conquering power of the image, coming from one of the greatest French writers, in itself reflects Flaubert’s very modern sense of anxiety about language. In any case, drawing Charles’s absurd hat, or making Emma’s wedding cake, is not a classic act of book illustration. It is more like a commentary on Flaubert’s aesthetics of parody. Or, indeed, an experiment: a reductio ad absurdum that pushes his descriptions of these ridiculous and anti-realist objects to their logical conclusion in order to expose their absurdity. Possibly, however, I – along with Nabokov and the illustrators of La Casquette de Charles Bovary – only think this because we are living in a world in which the image has already triumphed over writing to such an extent that we fear it is no longer possible to ‘get’ the absurdity of these objects without them being given visual form.

Far more than in the nineteenth century, our lives today are shaped by a constant flow of photographic images. Many of them are cinematographic images, and the invention of cinema dates back to the decades immediately following Flaubert’s death in 1880. No doubt he would have been horrified to learn that there have been several attempts at adapting Madame Bovary for film. Unsurprisingly, these have generally shied away from including examples of satirical ekphrasis or ‘unrepresentable’ objects. They avoid the novel’s first chapter and with it Charles’s hat. The 1991 adaptation by Claude Chabrol does, however, include a brief glimpse of the cake, partially hidden behind the diners at the wedding feast. This is analysed by Colin Davis for whom the cake is a ‘dizzyingly complex (I would suggest unrepresentable) object’; he links it to the novel’s ‘disruptive, ironic, self-undermining impulse’. 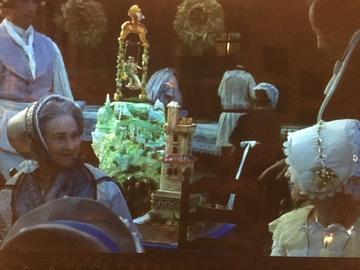 The fleeting appearance of the wedding cake in Claude Chabrol’s 1991 film Madame Bovary.

Unrepresentable or not, the description of objects such as the hat and the cake interrupt the careful plausibility of most of Flaubert’s descriptions in Madame Bovary. They remind us that the world of fiction is a verbal construct. Madame Bovary is, among other things, a novel that makes fun of naïve ideas about a direct relationship between language and the real. Although he does sometimes use description seriously, at times Flaubert also uses it to pull the rug out from under the reader, exposing our willingness to suspend disbelief at all costs.

If you’d like to have a go at drawing/photoshopping/sculpting Madame Bovary’s wedding cake before the Oxford Cake Shop makes it in real cake, please send your image to MmeBovaryWeddingCake@gmail.com.

Nabokov, Vladimir, Lectures on Literature, ed. by Fredson Bowers, introduction by John Updike (New York/London: Harcourt Brace Jovanovich, 1980). On the hat see p. 128, and p. 131 for a facsimile of his doodle in the margins of his lecture notes. 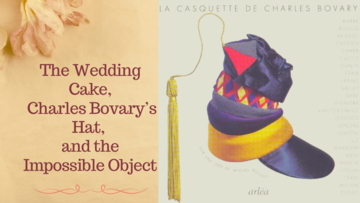